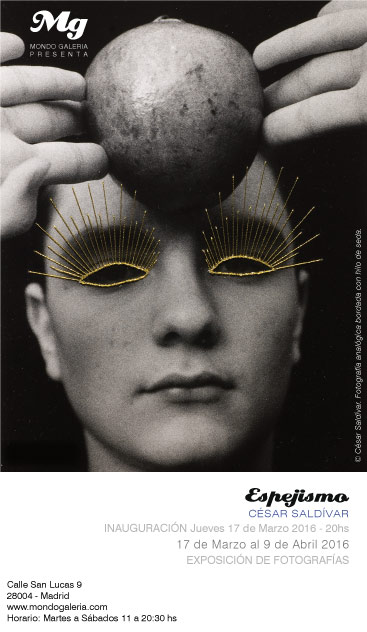 MONDO GALERIA presents “ESPEJISMO”(Mirage), the new work of Mexican artist César Saldívar. The artist has reviewed all the work that he completed in Mexico since 2000, celebrating the new millennium. Saldívar appropriates his black and white gelatine prints by embroidering over them with coloured silk thread. Inspired by the tradition of Mexico and contemporary artists like Julie Cockburn or Maurizio Anzeri, Saldívar’s work surprises us by the way the artist looks at himself and how his work is re-invented in this creative process. What is interesting, and unprecedented in this case, is that he works on photographs that he takes himself, contrary to the appropriation of an old or found photograph that is the norm of this technique. In this way, his work transcends the purely aesthetic to grow into a much more complex exercise of inner gaze and meta-image. In each photograph we can traverse each stitch of coloured thread that highlights details of a tradition that have already become distant.

“My head is a dark labyrinth, and sometimes lightning strikes and illuminates the paths. I never know why I do things."

MONDO GALERIA presents Antón Goiri new exhibition in Madrid. The Basque photographer presents his vision shaped by spaces that play with our perception, anchored in the thin line between reality and fiction. 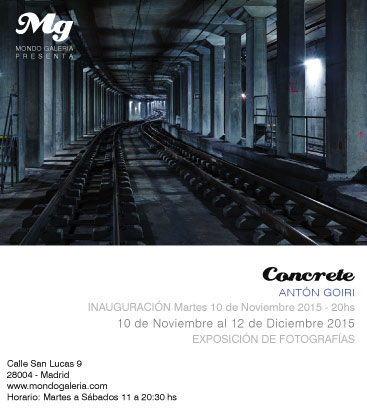 Like an idyllic hero, Antón Goiri flies over the depths. He invites us to join his journey, a journey simply to experiment with light, reflection and shade.

With his camera he faces bleak scenes, dealing with heavy realities, yet somehow manages to fill them with poetry that only his imagination and refined technique can extract.

As an alchemist of the image, the tunnels and underground enclosures that dominate his subject matter become alive beyond their usual sinister appearance. When looking at Goiri’s work, one does not face the haunting tunnels of Ernesto Sábato or intimidating passageways that transport the characters of the move The Matrix. In “Concrete” we see light tunnels, in which architecture and construction disappear to bring us closer to a dream space trapped between the universe of David Lynch and Nicolas Winding Refn. It is no coincidence that Goiri’s images refer to novels, films or dreams, since his imagery is a narrative composed with precision and above all the intention to take us beyond the everyday.

Goiri’s work transports us to his space and puts it in a more metaphysical plane than that of a simple image hunter. It places us in the space of art, where we cannot see the space for anything but simply what it is. 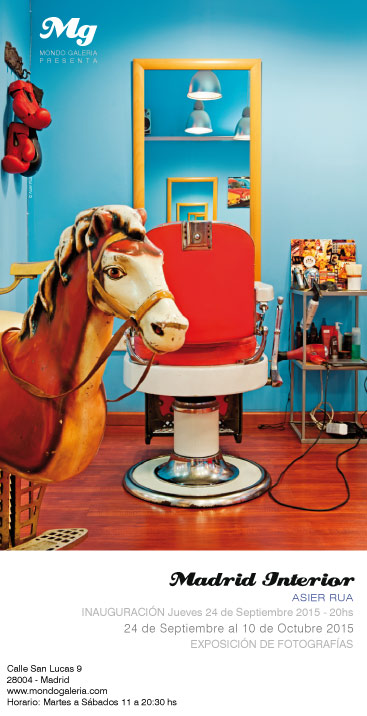 MONDO GALERIA presents “Madrid Interior,” the first solo photography exhibition of Asier Rua. The viewer is invited to get to know Madrid in a very special way, a way in which colour and history merge to reveal a latent city belonging to everyone, without intimacy or privacy. Fifteen photographs have been selected, from the ninety-three available in his book, which offer us a tour that began in the artist’s mind 7 years ago. For the first time in the city of Madrid, the photographs allow us to see the city blessed with colour and the chaotic elegance that is quintessentially Madridleño, which Rua has managed to capture in these images.

The exhibition is a tour of some iconic sites like the Madrid Casino owned by Jaime Hayón, Florida Park or the Spanish Film Library; or private spaces created by people for whom colour is a hallmark, such as the houses of Ouka Lee, Pepe Leal or Ágata Ruiz of La Prada, and the shops of Lorenzo Castillo and Guile García- Hoz. Projects by architects Izaskun Chinchilla, Andrés Jaque and Teresa Sapey are also portrayed. But this portrayal of Madrid would not be complete without the spaces of anonymous people, since the intention is not to reflect the interior design of Madrid but to capture the polyhedral essence of the city.

In some cases it is the history that gives value to the photographs because the passage of time and day-to-day life have impacted the spaces, as is the case of the mural that appears in the Almodóvar film ‘Labyrinth of Passions,’ home of the character Sexi (Cecilia Roth).

Accompanying the exhibition MONDO EDICIONES presents a limited edition prints based on photographs from “Madrid Interior” that can be purchased during the show. After the show they will become part of the MONDO GALERIA collection of public/affordable alternatives for those who want to start/continue their own art collections.

Exhibit of Photographs / from 14th October until 7th November 2015

"Simulation does not correspond to any territory, to no reference, no substance. Instead it is to generate through models of something real without origing or reality: the hyperreal."

MONDO GALERIA presents "Latente" (Latent) latest exhibit by Martín Sampedro (Santander, 1966) in which the artist investigates, through new technologies, the future of photography.

A conscious tribute to early photography and its Masters. Sampedro elaborates a singular cosmogony looking to reveal (to us) a new world hidden in new methods of creation which is apparently artificial but in reality it is so intrinsic to the way our minds build up images.

Thirty photographs present Martin Sampedro´s own iconography departing from ideas and deja-vus well used to invite us discover a mesmerizing unfolded world where he masters light, form and photography language. If recently was oin vogue to talk about "Expanded painting" or about concepts as "Post Photography", in "Latente" we are in front of a re-definition of photography medium. It is a game, where the artist creates images without a camera (as Man Ray has done at his time with his Rayograms) to create Alter Portraits where the faces of the protagonists merge(as Robert Mapplethorpe has tried to accomplish by superposing negatives) or well merged body volumes (as one can remember on Hans Bellmer´s poupette).

In this exhibit the visitor encounters an aesthetically surprising universe where the artist revises all his previous work to create for us with poetry a Genesis which has never existed.

With his Alter-Retratos, Sampedro, tributes photography as a media and by means of using mythological greek names, apart from relating past and present, he is commenting directly on the actual situation between of closeness and distancing of Greece and Europe. 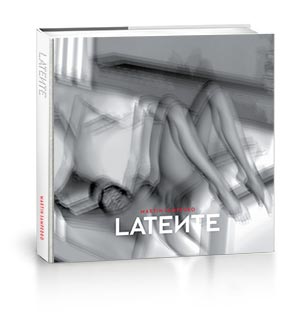 MONDO GALERIA presents for the first time in Madrid "Proscenium" a solo exhibition by Javier Silva Meinel (Lima, Peru. 1949). It is an exhibition that without being retrospective or an anthology runs through the entire oeuvre of this prolific photographer (or ethnographer) who has managed to find, represent and understand Peruvian folklore.
Twenty five images to glimpse through the eye of Silva the naturalness and humor connecting all simultaneous worlds that inhabit the Andes, from the Pacific coast to the Amazon rainforest. His works has been showed around the world and it is included on important international collections. This exhibition is part of Festival OFF Photoespaña 2015. 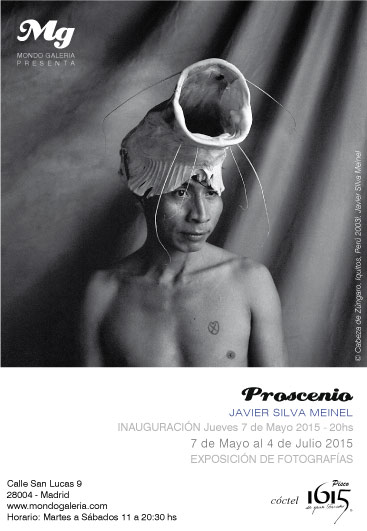 Just only few authors manage to cross the space between the camera and the subject.

As Photography is increasingly further from truth to be closer to narrative, to tell what one sees it is not simply to present it to a viewer, but, to confront the Viewer with it.
To create certain guidelines to distance us from the obvious thing it is much harder than to master a technical expertise.

When these two conditions meet up, we face an unparalleled visual epiphany. This is photography as art, as revelation and as a trigger for ideas.

To jump from performer to audience without an hegemonic dispute it is a mastery not found very often, and it is then when a literary image becomes an icon, when a person becomes a sign.

The Other, as it has been known for centuries does no longer exist, we live into a democratization of processes which makes all of us participants of a choral creation of archetypes.
Photography is essential in this process, it vanishes (for better or for worse) social differences. All we have seen, and have consumed, The Other, the faraway self, the different one. But until only very recent, we have not had the opportunity to enjoy it, to appreciate it, to understand it.

Otherness disappears as archaic iconography to be part of the process of contemporary creation of which Javier Silva Meinel is a pioneer. He is an expert, a scholar, a shaman.

Breaking the barrier of ethnic documentation creates a new way for which photography (and art) were not prepared. It creates a scene where The Other passes from being observed to be protagonist; it generates a break of axis where the new applied rules replace observation with respect and qualification with empathy. This is the path that takes contemporary photography towards a participative ethnography, and towards shared creation. Without a dispute, without wars, based on understanding and collaboration.
About Javier Silva Meinel


Javier Silva Meinel was born in the city of Lima, Peru in the year 1949. He enter in contact with photography as a student at the University of Lima. In 1971 he began his work as a photographer and he was dedicated to landscape and commercial work. From 1984 he ventured into portrait, interested in rituals, customs and Andean religious festivals, as well as in the world of native Amazonia. Since his first solo exhibition "Searching for a photographic intention" (Lima, 1978) a series of solo and group exhibitions at home and abroad followed, such as:

His works are in private collections and at museum ones as: Brooklyn Museum, Houston Museum, Museum of Photographic Art in San Diego, Museo de las Américas, Denver, Colorado, Art Museum New Orleans  and at the new Museo de Arte in Lima.

He has published the following books: “El Libro de los Encantados” in 1988; “Acho, Altar de Arena” in 1992; “Perú, fiestas y costumbres” in 1997; “Calendario Perú, Tiempos de fiesta” in 1998. "Visiones de Machu Picchu" in 2011 and in 2012 his work was published in Spain into the collection Photo Bolsillo by  La Fábrica Editorial.
In 1990 he receives the grant of John Simon Guggenheim Foundation. 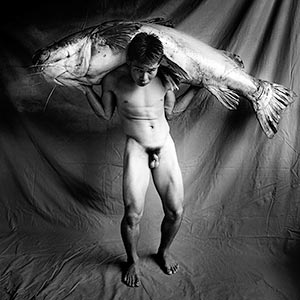 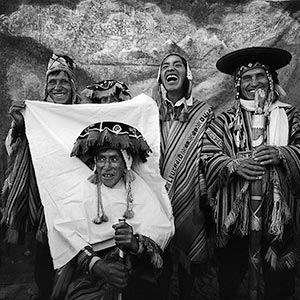 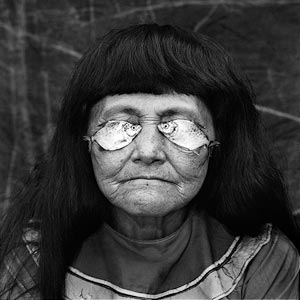 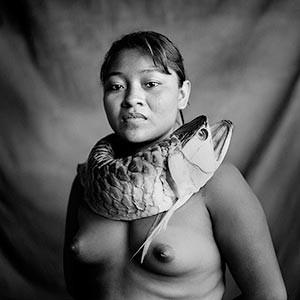