“Being covered can be interpreted as a state of confinement, but in fact, one can be confined whether or not they are veiled or not.”.

MONDO GALERIA presents for the first time in Spain the latest works by multimedia artist Alia Ali. “Borderland” continues with her photographic investigation about the textile processes from around the globe. With this series she continues exploring the boundaries within dualistic relationships. Her work takes her around the world searching for those fabric patterns in extinction and their evolution in time, traditions and cultures from villages, cities or empires. 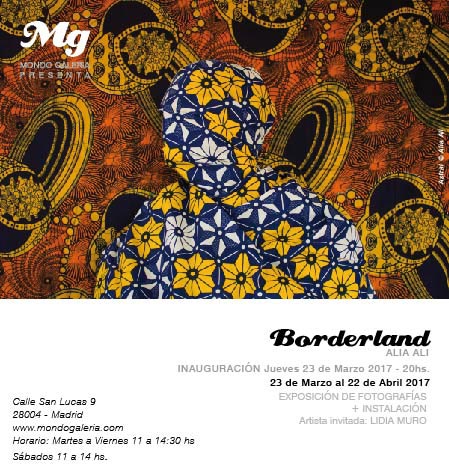 As guest artist for this exhibition, Madrid based designer Lidia Muro creates a site-specific installation in MONDO GALERIA working with textiles collected by her from around the world.

Casual, or causally both artists have been at different times  in the same places. For very different reasons, but with the same passion for fabrics, thus a very sharp dialogue has been created over the two works.

BORDERLAND is a series of portraits that questions the barriers which divide and unite us, all at once. The characters in her portraits, called “-cludes”, are enveloped in layers of fabric from eleven different regions of the world. The fabric as a borderland becomes a territory of exploration where  the mysterious becomes apparent, restraint becomes freedom, and illusion becomes reality.

The sensation gathered from these magical images created by Alia Ali is strange as in The Tempest by Greenaway. On one side they absorb us as a mirror, while on the other they transmute us to political thinking, to this incomprehensiveness where we are submerged, even if just by pluralities weight.

It is not easy to face an image which departing from a flat element and jetted in the form of pigment on to another flat element – specifically cotton paper – can gather such an inward strength to propagate at thinking level both, towards the interior of it as to the entire world surrounded, getting us trapped on a roller coaster of ideas circulating through the most opened channels of universal energy. Far beyond the earthly world, in orbit. 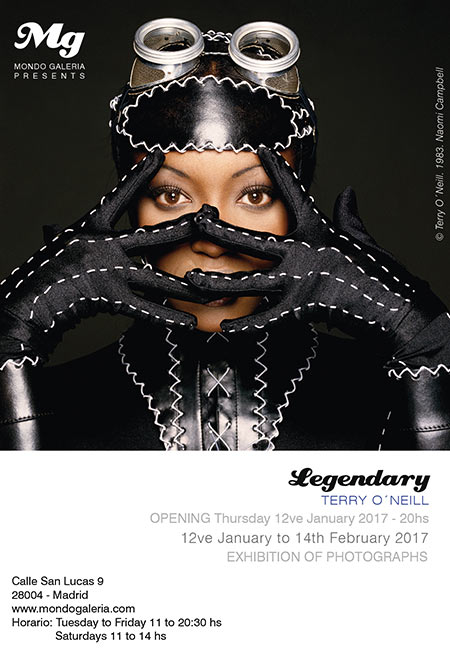 “I never think of myself as an icon. What is in other people's minds is not in my mind. I just do my thing.”

MONDO GALERIA presents for the first time in Madrid this exhibition of photographs by TERRY O'NEILL, curated by Diego Alonso in which we face the most important icons of the twentieth century photographed at different times of their artistic careers . Audrey Hepburn , Sean Connery, David Bowie or Naomi Campbell pose in front of the lens of a photographer who is characterized by the closeness of his images and his invisible presence. The faces of the protagonists of a century has passed in front of his lens. Admirable , adorable , endearing and above all sincere these 18 portraits selected specially for the exhibition will be distributed in between MONDO GALERIA and Hotel Hesperia in Madrid.

A retrospective selection made by Diego Alonso for MONDO GALERIA shows the extreme variety of the works by a photographer who, from the 60s until today, has photographed the faces of young music talents and major Hollywood stars, models and star-system characters.

Terry O´Neill´s career began  in the 1960s after a sheer stroke of luck. His plan was to travel to the US to become a musician, but he happened to take a picture of the British Foreign Secretary asleep at the airport in London. A newspaper bought the picture and his career took a complete turn over.

His personal style has been defined by two factors: the use of a 35 mm camera, which is much lighter and easier to handle than most modern devices, and the amount of time he would spend with his targets, who he would practically shadow for days. The outcome was a natural, direct and casual style that remained throughout his career. 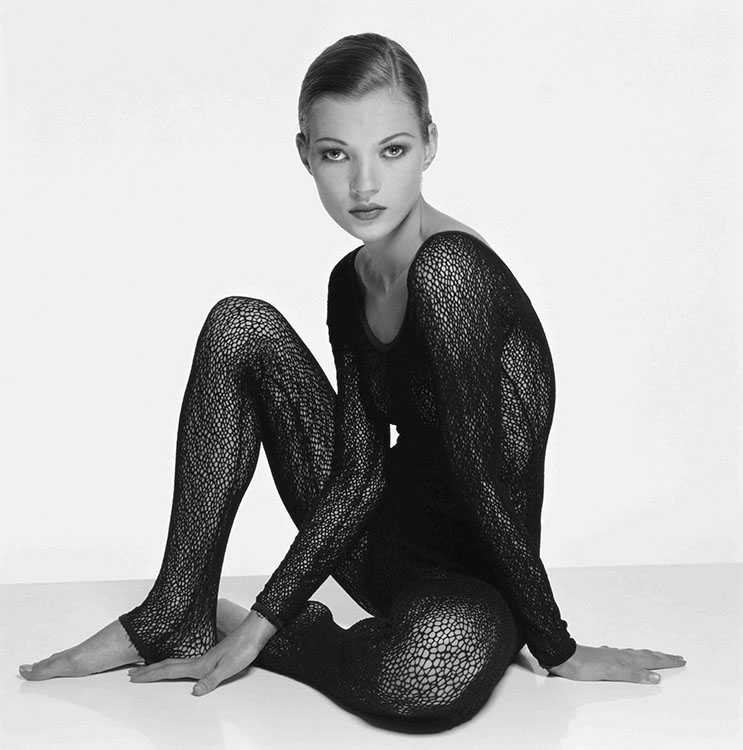 Exhibition of photographs and book presentation 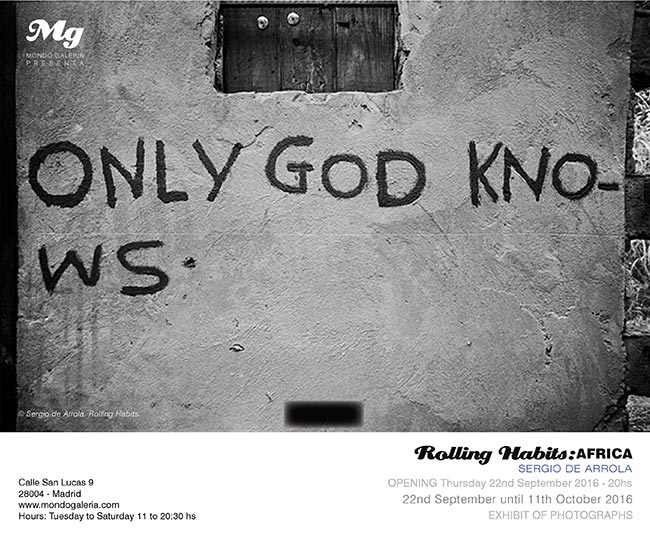 Sergio de Arrola travels with his bicycle to the most remote and unexpected places of the planet searching to connect with other beings in a "face to face" encounter. As an alien on a bike, Sergio get closer to the human part of each person, simply for the sake of being.

In times of airports, cars and high speed trains the Odyssey started by Rolling Habits takes much more value and significance. Scumbled through the pages of the book he tells us the stories of different characters who cross his way by chance, free into an uncertain destiny, although promising. He becomes a kind of contemporary Quijote who does not fight against giant fans but instead he tries to get close to them to exchange friendship. His camera (Sancho) and his bicycle are the only things that attaches him to his culture; apart from that he travels released to the rhythm of his pedaling and to the causality of his thought.

“A night with Marilyn“

"In my recollection she moved with a floating slow motion, more ethereal than real.
That was the strange thing about Marilyn’s voluptuousness and beauty… it wasn’t really earthly". 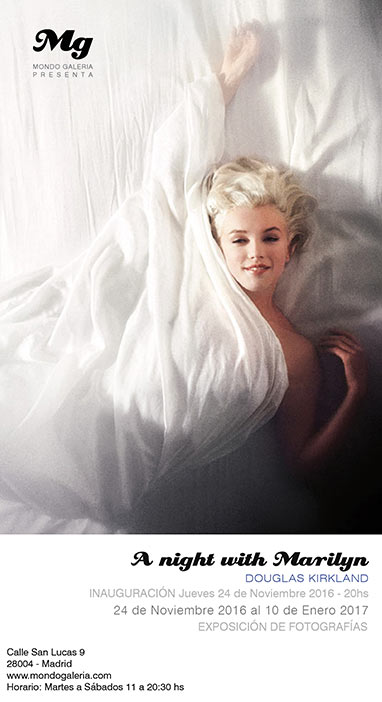 MONDO GALERIA pays a tribute, one more time, to the great "Diva" of the silver screen and pop icon: Marilyn Monroe. For the first time in Spain presents the exhibition "A night with Marilyn" by canadian photographer Douglas Kirkland. Frank Sinatra´s music, champagne, silk bed linen, a man and a woman. The dream of any man of that time materialized on a young photographer shooting his assignment for the 25th anniversary of the mythical Look magazine. The result: un unforgettable series of photographs, a vulnerable, natural and undeniably seductive Marilyn, an unprecedented style which will inspire upcoming sessions with great photographers of the time.
What is it, all this obsession about Marilyn Monroe?


Is it her fragility (though she had the strength to get to where she got)? Is it her sensuality (even if much of her beauty was artificial)? Is it her acting (despite not having been a great actress)?


Over the years (and with the help of artists and strategists), Marilyn Monroe has become an icon; one of the biggest and most important cultural icons in contemporary history. We could consider her a meta-icon, since she is an icon that does not symbolise anything in particular, and at all in general.


A sign of our times. A collective obsession. Marilyn Monroe is not a woman anymore, nor an actress, nor a diva, but she is a symbol of our paradigm, a cult element comparable to an Hindu or Greek goddess, such as Rati or Aphrodite. She is an object of adoration into a culture without gods, or a culture in which gods are ever closer to humanity, and to vulnerability. 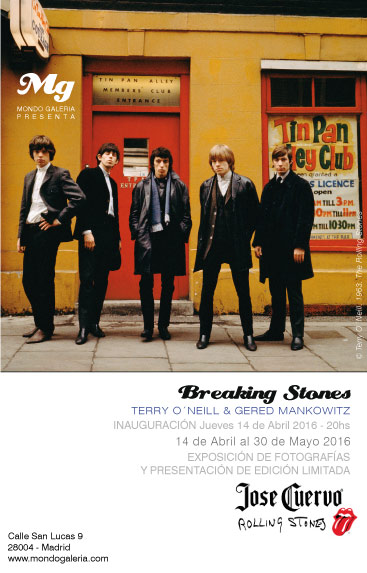 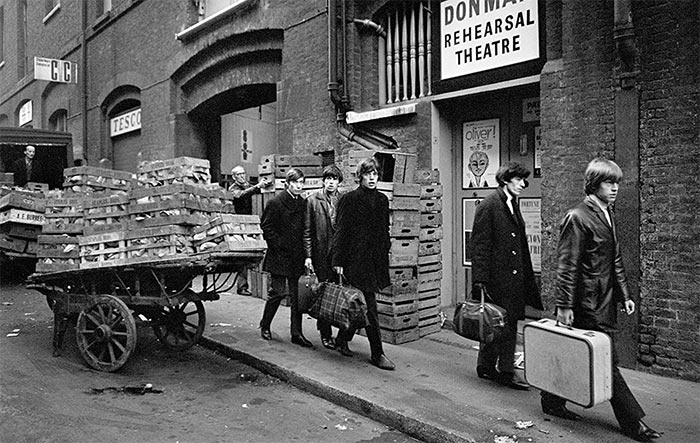